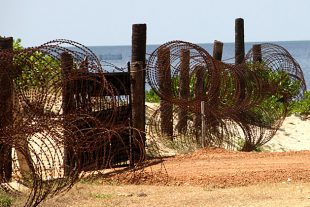 Between 1983 and 2009, a brutal civil war threatened to tear Sri Lanka apart at the seams. Waged primarily between the island’s Sinhalese majority government and the Liberation Tigers of Tamil Eelam (LTTE), the conflict claimed over 100,000 lives. The war only came to an end when the army killed the LTTE’s charismatic leader Velupillai Prabhakaran, after a bloody campaign in the north.