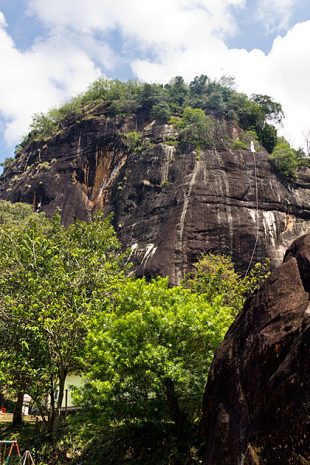 Twenty kilometers north of Tangalla lies the large rock of Mulkirigala, reminiscent in shape to Sigiriya. The rock houses an impressive series of cave temples dating from the third century, similar to those of Dambulla. A mix between Sri Lanka’s two most famous sites, Mulkirigala sounded like a winner.

Prince Kassapa had always harbored a secret jealousy towards his half-brother Moggallana. Upon the demise of their father, King Dhatusena, the throne would surely pass to Moggallana, whose mother was the Royal Consort. Kassapa, on the other hand, had been born of a common concubine. But he was not the sort of youth to resign himself to his fate. “No”, he told himself in the palace at Anuradhapura one dark evening in 473 AD. “No, the throne must be mine”!