An unbroken string of tiny towns and hotels stretches out to the east of Galle. The busy road which hugs the coastline passes through Unawatuna, Dalawela, Thalpe, Habaraduwa, Midigama, one right after the other; each offering tourists an insane number of places to stay and things to do.

We were on this road constantly, en route to places like Alanthgama, where we hoped to see stilt fishermen, or Weligama. This village is set up around a gorgeous circular bay, with a lushly forested mini-island as its centerpiece named Trapobane (also the name Arthur C. Clarke lent Sri Lanka in The Fountains of Paradise). You can rent the villa on Trapobane by the day for an obscene amount of money; it even comes with a full set of personal servants to help you indulge your tackiest private-island fantasies.

We spotted a couple other islands up and down the coast. One just past Midigama, where there’s supposed to be great surfing, and another in the bustling town of Matara, where we switched buses once. Matara’s island is just across from the bus station, and occupied by the picturesque Parey Duwa Buddhist temple. 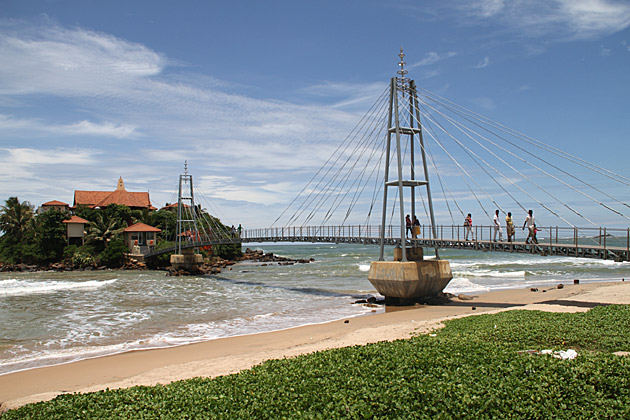 Most of the coast is rocky, but every so often you’ll spy a bit of golden sand that’s good for a dip. The waters here are rougher and rockier than on the beaches of Trinco, for example, but that makes for more dramatic scenery. Although the coastline itself is heavily developed, it stretches out for so long that finding a small bit of private sand isn’t impossible.

Our best day along the coast was spent at the Wijaya Beach Club, in Dalawela. Pizzas which could almost compete with those of Palermo (almost), and a tiny but excellent beach. While we ate, we watched the waves where six sea turtles were struggling to swim back out into the ocean. Every once in awhile, their heads would poke above the water. They kept getting swept toward the rocky shore, but eventually made their escape. Nobody else in the restaurant had seen them, and they all must have thought we were crazy, staring out into the ocean and randomly cheering.

Location of Trapobane on our Map

–For 91 Days in the Newspapers